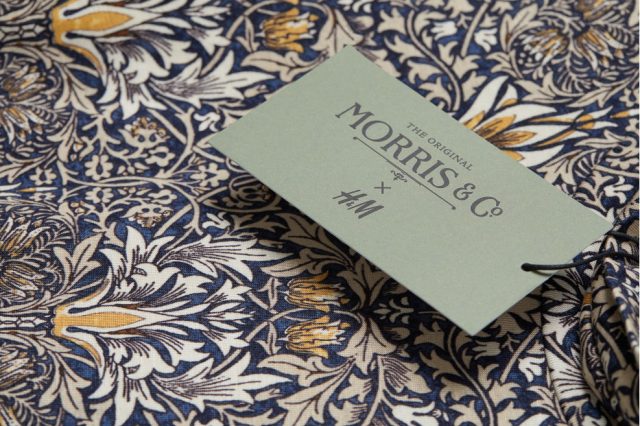 H&M have collaborated with some great designer and brands in the past. Including Balmain, Versace and Lanvin. The latest company to join creative forces? The English company Morris & Co. Famous for their home decor furnishings wallpaper, prints and textiles. The Morris & Co. collection for H&M launched this past week, on the 4th October. Taking a different approach to their stylized prints and applying it the fashion retailer. H&M also teamed up with fabric company GP & J Baker in August. After the successful summer collection they teamed up with Morris & Co. for the 2018 Autumn Winter season.

It’s often said that fashion and home go hand in hand. With fashion very much dictating the up and coming trends for the home. With Morris and Co. being such a traditional decorative furnishings company I think the collab is a great way to bring the English company to the forefront. Their patterns, intricate, detailed often symmetrical. Drawing inspiration from botanicals and florals for composition. I’m loving their blouses, dresses and tops that they’ve come out with. It’s a great way of teaming the old with the new not only in fashion but in the home too. I love, love the modern looks in interiors with the neutral palettes and clean lines but it’s great to recognize colour and pattern too! Here are some of my favourite William Morris pics from the ‘Gram, interiors and fashion…

William Morris was a poet, a novelist and textile designer in England in the 19th century associated with the Arts and Crafts movement. He cofounded a firm producing wallpapers and textiles. The firm was a huge contributor into reintroducing the traditional British methods of production. Their furnishings were very popular in the Victorian period. The company was fully taken over by Morris in 1875. It was his belief that everyone is entitled to a nice home. With one of his most famous quotes being “Have nothing in your house that you do not know to be useful, or believe to be beautiful.” Morris & Co. is still going strong over a century later. With still a huge following and say in the interiors world making a cross over to today’s fashion world. It looks like H&M with their collabs can do no wrong! Who do you think H&M is next going to collab with? Place your bets!

Follow
This error message is only visible to WordPress admins

Any cookies that may not be particularly necessary for the website to function and is used specifically to collect user personal data via analytics, ads, other embedded contents are termed as non-necessary cookies. It is mandatory to procure user consent prior to running these cookies on your website.