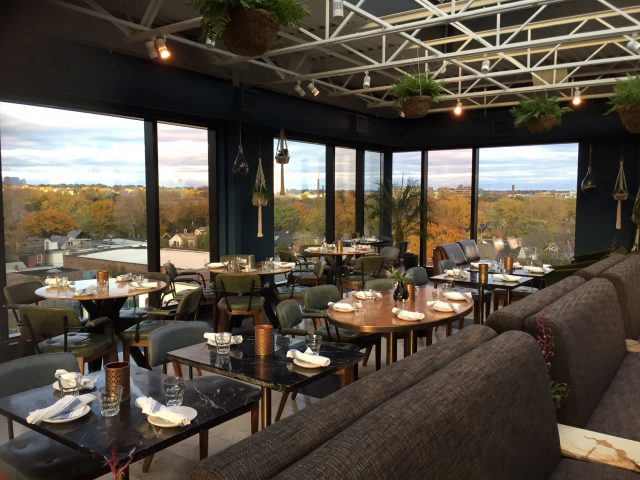 The Broadview Hotel opened in this summer after three years of renovation. I had popped in last month during a late evening with a friend, it was really busy! I love to go and have a peek at the interiors of new places. Just yesterday I went to take a proper look for myself…

Located in Riverdale on the corner of Broadview and Queen St. East it’s the beautiful restored red brick building by ERA Architects. Originally built in 1891 as Dingman’s Hall as a community place, before the over haul it was known as Jilly’s strip club. Purchased by Streetcar Developments in 2014, Design Agency was responsible for the interior design of the hotel which hosts 58 boutique rooms a restaurant, an event space, a private dining area in the tower and its new roof top bar. The restaurant is open through out the day and rooftop opens from 4pm onwards.

Broadview Hotel – Building on the History

The Broadview Hotel has a lot of history and during its refurbishment uncovered a lot of surprises when peeling back its layers. One of which was the Victorian wallpaper found from years ago. The wallpaper in the ground floor restaurant is reproduction of pieces of wallpaper revealed when stripping back it’s walls. This wallpaper was especially made and redesigned by an artist based on European ceramic tile from the 19th century. The original colour of the wallpaper found was blue but I love the vintage green used instead above the painted wood panelling.

Almost strange to then see a squiggle flash of pastel pink above the open brass shelving in the bar area but it works. An eclectic but balanced mix of Victorian elements with a modern take. Modern Victorian. Not sure if that’s an official ‘term’ but that’s how I describe it! Even the wooden seating is finished with either a white ombre paint on the legs or a brass detail.

As you go ascend up through the building the interior gradually becomes more contemporary. The seventh floor, the roof top and conservatory a new addition to the building, is painted a deep teal on the walls. And the green used in the wallpaper downstairs has been carried through upstairs for the seating. It also has gorgeous moss green velvet sofas to sink in to. Rectangular black marble tables used instead of the round white marble brasserie tops downstairs. Brass holders placed on the table tops details to complete the style set up. Decorated with botanical plants and greenery with 360 degree views of East Toronto, especially this time of year it’s a pretty sight!

It’s been a pleasure as always! @pottypower 😘